“Everyone involved with the film has worked incredibly hard the past two years maintaining the highest level of secrecy,” the letter reads. “Only a handful of people know the film’s true plot.” For two years, fans have been chomping at the bit for the next installment of the Avengers series, which promises to be the biggest Marvel film to date, bringing together all of the characters from the cinematic universe. Since the movie’s first tailer, fan sites have been breaking down every single frame, trying desperately to decipher any clue about what is going to happen — and who might not make it out of this one alive. The potential for spoilers is so great that Marvel Studios head Kevin Feige has even said that the title for 2019’s Avengers 4 is being kept under wraps, because that itself would be a spoiler. 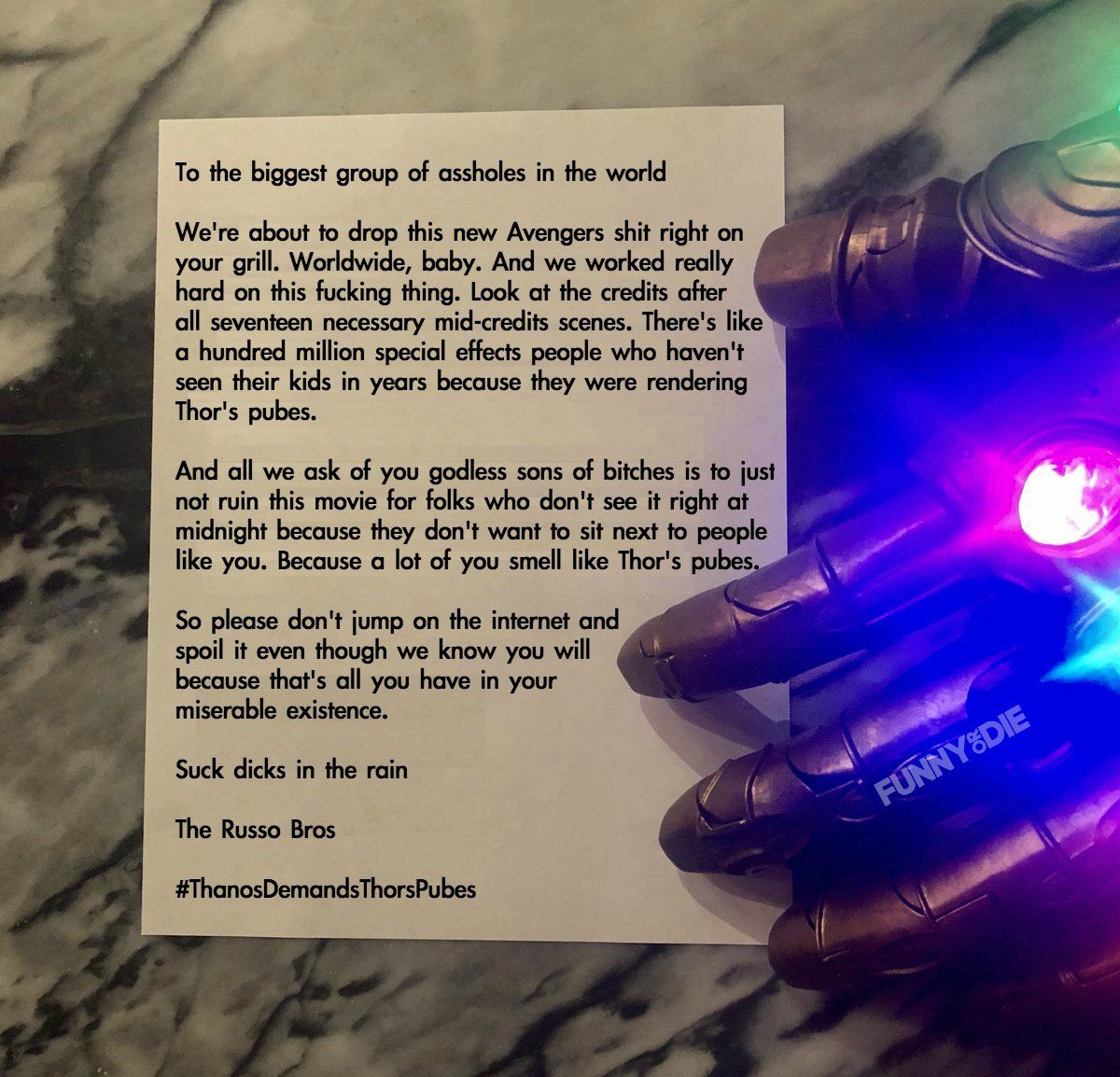 American Gods is officially recasting Anderson’s role of Media, TV Line reports. Anderson’s scene-stealing goddess of pop culture and television is now being reworked as New Media, and looking to cast a 20-something Asian actress. The character reportedly “symbolizes the role of social media in modern American life the same way that Gillian Anderson’s Media represented television and pop culture in Season 1.” Anderson announced that she wouldn’t reprise the role of the shape-shifting goddess in January, shortly after Fuller and Green departed the series. Whether this was in solidarity with Fuller and Green’s vision of the show, we can’t be sure, but it certainly seems that way. Anderson was a standout of the first season of American Gods, donning the forms of pop culture icons like David Bowie, Lucille Balle, and Marilyn Monroe with malevolent glee, and offering an ethereal performance that went above and beyond the already-compelling character from the novel.

Look out, Belfast. A town near Boise, Idaho is about to be the next hot destination for Game of Thrones fans. It’s getting two residential streets named after the show’s characters, and several more could be on the way. The Silver Trail subdivision in Kuna, a small town less than 20 miles southwest of Boise, is planning a pair of residential streets named after characters from Game of Thrones: Baratheon Avenue and Rickon Street. It’s all thanks to Jannell Hall of B&A Engineers. A 17-year veteran of residential engineering and development projects, Hall told io9 this was the first project where the developer gave her “carte blanche” to name the neighborhood’s streets, so she filled them with names from nerdy shows she loves. She was worried they’d be rejected but apparently, she’s got a fellow Game of Thrones fan on the street naming committee, which she thinks gave her an edge. “In this one I’ve got Game of Thrones, Firefly, I’ve even thrown my son and my husband’s names in there,” Hall said. “Basically I’m like, ‘Okay I’m a geek, I have a lot of fandom, [and] Game of Thrones is unique enough and big enough.’”

The CW has renewed 10 of its current series, the network announced Monday.The renewed series are: “Arrow” (Season 7), “Crazy Ex-Girlfriend” (Season 4), “Legends of Tomorrow” (Season 4), “The Flash” (Season 5), “Jane the Virgin” (Season 5), “Riverdale” (Season 3), “Supergirl” (Season 4), and “Supernatural” (Season 14). In addition, freshman shows “Black Lightning” and “Dynasty” have been picked up for second seasons. Specific premiere dates for each series will be announced at a later time. The network will make decisions on their originals “Life Sentence,” “Valor,” “iZombie,” and “The 100” in May.“As The CW expands to a six-night, Sunday through Friday schedule next season, we are proud to have such a deep bench of great returning series for 2018-19,” said CW president Mark Pedowitz. “By picking these ten series up for next season, we have a terrific selection of programming to choose from when we set our fall schedule in May, with more still to come. And I’m especially happy that we’ll continue to work with the incredibly talented casts, producers, and writers who create the series our fans are so passionate about.”

Ryan Reynolds showed off a new, bright pink version of his Deadpool costume in a new video auctioning off the super costume to raise money in the fight against cancer for the nonprofit Fuck Cancer through an Omaze campaign. In a “special message from Deadpool,” Reynolds explained the pink suit was for the “world to see that I have a big old heart-on…that’s heart with a ‘t’…for my new obsession, pink — the color, not the singer. Personally I’m more of a Celine guy.”Participants can donate anywhere from $10 to $5,000 to the cause for a chance to win the pink Deadpool suit. Donations of over $1,000 or more include other gifts, such as a signed movie poster or a personalized voicemail message recorded by Reynolds in character. As for what the winner can do with the suit should he or she be selected, the actor offered a number of options, including adding it to your “S&M collection” or “nailing it to a post in order to scare off birds, children and the elderly.”