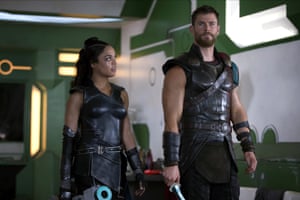 The Thor movies have always been something of a mixed bag. Kenneth Branagh’s cultured introduction to the Norse deity, 2011’s Thor, brilliantly imagined the comic-book saga as heroic fantasy in space, one part Tolkien to two parts Gene Roddenberry, with a dash of cod-Shakespearean pomp for good measure. Then 2013’s Thor: The Dark World rather ruined it all with a muddled tale of cosmic dark elves that to this day remains an entirely missable entry in the Marvel canon. Now we have Thor: Ragnarok, billed by its director Taika Waititi as a reinvention of the son of Odin, and currently the recipient of a staggering 99% “fresh” rating on the review aggregator Rotten Tomatoes.

What We Do In The Shadows TV Show?!

Taika Waititi‘s Hollywood blockbuster debut looms with the upcoming premiere of Thor: Ragnarok, but it’s a previous Waititi film that’s being eyed for a potential U.S. TV version. In an interview with Fandango (the outlet, not the wrestler/detective), Waititi shared that he’s hard at work on turning hilarious vampire mock-doc What We Do In The Shadows into something for the small screen. Albeit with a tweak for the targeted market. “We’re trying to develop a U.S. version of What We Do in the Shadows,” Waititi said. “You know, set here in the states, but a T.V. show.”

Preacher has been renewed by AMC for a third season. The news was announced by executive producer Seth Rogen via Twitter:

The 13-episode third season will debut in 2018, according to the announcement. The show stars Dominic Cooper as a preacher turned criminal named Jesse Custer, Ruth Negga as the outlaw Tulip, and Joseph Gilgun as the Irish vampire Cassidy. Together, they’re on a road trip across the United States to find God, who’s gone missing from Heaven.

While Tom Hanks has fielded a wide variety of roles over his storied onscreen career, there’s one thing he’s yet to tackle: a proper sci-fi film. However, that will soon change, since the megastar is now set to headline one such film project, a post-apocalyptic sci-fi film, called Bios. Moreover, he’s got a director in tow whose star is surging, thanks to his phenomenal work on Game of Thrones. Hanks is attached to Bios as its star, reports Variety. The project – a spec package penned by Craig Luck, rewritten by Ivor Powell – had apparently been shopped around, with Amblin expected acquire it (with Legendary and Warner nipping at its heels). The story, set on a post-apocalyptic Earth, will see Hanks playing the dying creator of a robot protagonist that was created to care for the creator’s dog in the imminent event of his death. However, the film will showcase the robot’s personal journey, said to be fixated on the discovery of “love, friendship and the meaning of life.”

Shazam Has Been Cast!

We’ve known since 2014 that Dwayne “The Rock” Johnson would be playing Black Adam, the ancient Egyptian adversary of DC’s Shazam/Captain Marvel, in a solo film in the DCEU. Now, we finally know who’ll be playing his his heroic nemesis in the Shazam! movie: Zachary Levi. New Line Cinema, a subsidiary of Warner Brothers, will handle production of the film, and filming is expected to start in February 2018.