A woman who stockpiled more than £2,500 ($3,100-US) worth of masks, gloves and face shields has said she won’t donate any to the NHS as they ‘should have been more prepared’. Becca Brown, 35, from Portsmouth, shelled out thousands for PPE as NHS trusts and care homes across the UK battled to the secure equipment needed by medics to treat coronavirus patients. The admin assistant has spent around £200 ($250-US) on surgical masks, £250 ($310-US) on hand sanitiser and hundreds on coveralls and face shields since the coronavirus pandemic began to rapidly spread across Britain last month. ‘The few friends I have shown it too are stunned at the amount of kit (PPEs) I have got and have told me I should donate some to the NHS which is running short,’ she said. ‘They’re shocked when I’ve said, “I am sorry I just won’t do that”. ‘It’s not my job to ensure the NHS have proper protective personal equipment. That’s the government’s job.’

Louisiana’s Central Police Department is being flooded by phone calls from supporters of Pastor Spell, who was arrested twice earlier this month — once for defying the state’s lockdown orders, and once for assault with a deadly weapon. According to The Advocate, Spell’s mother posted the department’s phone number to Facebook and encouraged people to call. “This phone number is the line we receive all of our calls on including our emergency calls from citizens needing our assistance or help due to a life changing emergency,” Central Police Chief Roger Corcoran wrote on Facebook. “If you can not reach us due to our lines being tied up please keep trying. If you have an emergency please call 911.”

Chaos erupted at the Michigan statehouse, where more than 100 demonstrators burst into the Capitol to protest the governor’s stay-at-home order. A crowd gathered outside Thursday morning, but after noon some of them made their way into the statehouse demanding to be let onto the House floor, according to videos shot from the scene by local reporters. “Let us in, let us in, let us in,” demonstrators chanted. Some demonstrators shouted that Gov. Gretchen Whitmer was a tyrant, and one demonstrator outside carried a sign calling for the Democratic governor’s execution. Defend democracy. Click to invest in courageous progressive journalism today. Almost none of the protesters were wearing a protective mask, but many carried rifles, and they packed into the building’s entryway shouting and chanting. One video showed a man bellowing “redcoats” at Michigan State Police troopers, who were wearing medical masks as the demonstrators gathered around them, and others shouted “heil Whitmer.”

BONER CANDIDATE #1:WHAT ABOUT YOUR WIFE, GOV?

Billionaire Governor of Illinois J.B. Pritzker dodged a question about the whereabouts of his wife during a press conference Wednesday after it was reported she had left the state to ride out the stay-at-home from their $12.1million Florida equine estate. Gov. Pritzker refused to answer the question stating his family should not not be brought into politics, slamming the story as ‘reprehensible’ despite his wife M.K. Pritzker having an office in the Illinois Capitol and a full-time staffer. In contrast, answering the question immediately after about businesses in the state disobeying the stay-at-home order, Pritzker warned that there were many ways they could be punished for reopening too soon. The report that the first lady had left the state came after the governor extended ‘All Illinois’ stay-at-home order through May 30 and faced several legal challenges for doing so. The stay-at-home order is the second longest in America. The governor is a member of the Pritzker family who own the Hyatt hotel chain.

BONER CANDIDATE #2:WE NEED TO FREE UP THE HOUSING.

In the wake of a Facebook post where he suggested that society should allow people who are weak, elderly, or homeless to succumb to coronavirus, a California politician is on the receiving end of some serious blowback. In the April 23 post, Antioch planning commissioner chair Ken Turnage II said that coronavirus is like a forest fire that burns “old trees, fallen brush and scrub-shrub sucklings” that drain resources, adding that society will “strengthen” when the pandemic “is all settled.” “We would have significant loss of life, we would lose many elderly, that would reduce burdens in our defunct Social Security System, health care cost (once the wave subsided), make jobs available for others and it would also free up housing in which we are in dire need of,” Turnage wrote in the post that has since been deleted.

BONER CANDIDATE #3: A GIFT THAT NO ONE WANTS. 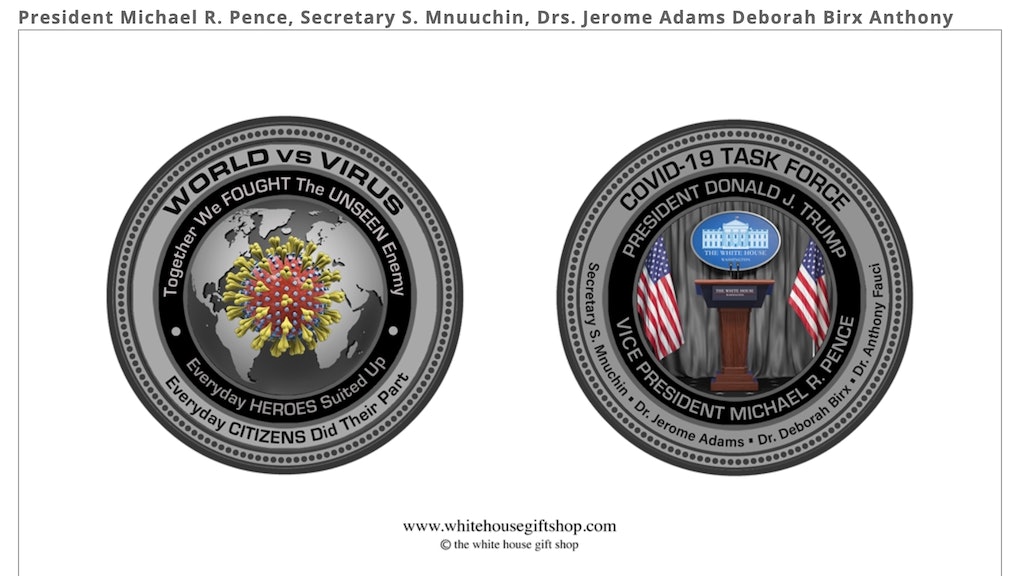 In a sales pitch that absolutely no one has asked for, the White House Gift Shop is selling COVID-19 commemorative coins, emblazoned with slogans like “World vs The Unseen Enemy” and “Everyday HEROES Suited Up.” As the deadly virus continues to kill thousands of people and cripple daily life for most Americans, the privately-run White House store is asking buyers to fork out $100 (reduced from $125!) to commemorate the “historic moment.” One coin has an image of a COVID-19 spore superimposed on a world map, while a second coin features an empty White House podium with the names of the coronavirus task force members surrounding it including President Trump, Vice President Pence, Treasury Secretary Steve Mnuchin and medical experts Drs. Deborah Birx and Anthony Fauci. The shop—which is privately-run but was established by then President Truman in 1946 and says it is given exclusive trademark rights—said sale proceeds will be donated to hospitals.