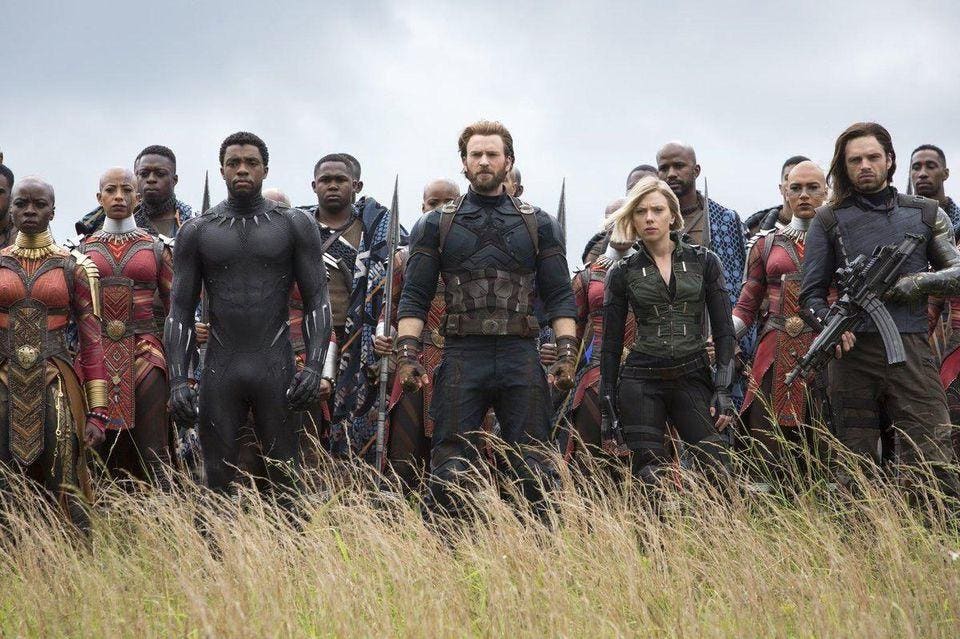 With 10 years and 18 films in the Marvel Cinematic Universe preceding it, Avengers: Infinity War seems poised for box office annihilation upon hitting theaters this week. Now, tracking results all but confirm the 19th MCU installment will enjoy not only the biggest opening weekend in the franchise — but one of the biggest openings of all time. Infinity War is expected to score between $216 million and $235 million in its domestic opening. If it lands in the high end of that range, it will surpass Star Wars: The Last Jedi’s $220 million debut to become the second-biggest domestic opener of all time. Deadline reports that some people have pegged Infinity War’s opening as high as $275 million, which would eclipse the current record-holder, Star Wars: The Force Awakens’ $247.9 million opening weekend, by 11%. That seems like an awfully generous prediction despite positive early reviews and massive pre-release hype, but a low-to-mid $200M’s opening certainly seems attainable. The figures look equally rosy overseas, where Infinity War will begin its rollout on Wednesday in Korea, France and Australia before expanding to all other markets by Friday, with the exception of China and Russia. Industry sources predict a $256M-$263M international bow, with some insiders ratcheting that number up to $275M, just as with the United States.

Warner Bros. finds itself stuck in an Australian court in a lawsuit filed by director George Miller over Mad Max: Fury Road, the celebrated 2015 film that grossed more than $375 million worldwide. Miller’s loan-out company alleges that its deal for the movie provided a $7 million bonus if the final net cost of Mad Max: Fury Road didn’t surpass $157 million. Miller is demanding payment, but by Warners’ calculation, the film went over budget. Miller rejects this proposition, blaming a series of decisions which he alleges caused substantial changes and delays to the film. He asserts that Warner Bros. shouldn’t take those costs into account. Plus, he is testing a provision under Australian consumer law for Warners’ alleged misleading and deceptive conduct in making a deal without informing Miller how added costs would factor into budget calculations. Additionally, Miller is also claiming that Warner Bros. breached a provision of the contract that provided that if a co-financier was sought, Miller’s company would have first opportunity to provide financing on terms comparable to similar financing deals. Warners made a deal with Ratpac Entertainment — a company co-owned by Brett Ratner and, at the time, future Treasury Secretary Steve Mnuchin — allegedly without extending an offer to Miller’s company.

The 77-year-old actor is known for speaking his mind – as James Corden found out, to his dismay – and his latest revelation throws similar disregard to the concept of schmoozing within the industry. Stewart was participating in a Q&A at the Emerald City Comic Con (which was filmed in 2013 but has only come to light now) when he was asked about working on David Lynch’s 1984 film ‘Dune‘ – and specifically, what it was like working with stars like Sting – but he didn’t have a clue who he was. “Music, at least popular music, has never played a big part in my life,’ he said. “I had never heard of Sting. That’s how isolated I was from the music world.” He added: “I heard he was a musician … and so the second or third day we’re just hanging out on the set, just him and me, and I say, ‘So, you’re a musician?’ And he said, ‘Yup.’ And I said, ‘What do you play?’ And he said, ‘Bass.’ And I said, ‘You know, I’ve often wondered what is it like carrying that huge thing around everywhere you go.’  “And God bless him, he said, ‘No, bass guitar.’ And I said, ‘Are you a solo artist?’ And he said, ‘No, I’m in a band.’ And I said, Oh, what kind of band?’ And he said, ‘The Police’. “Folks, I said, ‘You play in a police band?'”