HERE IS YOUR MUSIC NEWS FOR THE WEEK OF AUGUST 5TH!

All the music news of the alt world that’s fit to print, if not by telegram, then by interwebs! Alice in Chains has hit yet another milestone, this time with their album “Dirt.”

This means there have been 5 million units of the 1992 album sold in the U.S.

System of a Down and Cats-What More Could You Want?

It’s a well-known fact that the internet LOVES cat videos.

A TikTok user has taken videos of cats sleeping, clawing, and freaking out at their own reflections and compiled them to the sweet sound of System of a Down’s “Chop Suey!”

While you’re on that user’s profile, be sure to check out the video of cats dancing to Iron Maiden. Panic! At The Disco is sharing a new song.

“Local God” is from the band’s upcoming seventh record, “Viva Las Vengeance,” which is due out on August 19th.

The band will perform at this year’s MTV VMAs on Sunday, August 28th.

They will also be hitting the road for the Viva Las Vengeance Tour, which kicks off on September 8th with a stop in Salt Lake at Vivint Arena on October 13th.

When was the last time you panicked? Weezer announced in June that they would be performing a Broadway residency in September at The Broadway Theatre.

The first four nights were divided among the band’s four-part EP project, SZNZ, which was intended to coincide with the residency. The first two SZNZ EPs—Spring and Summer—have already been made available.

However, since then, the residency has been canceled, according to a message posted by the band’s leader, Rivers Cuomo. The reason for the cancellation was due to low ticket sales and unbelievably high expenses. After kicking off their worldwide tour last Friday in Salt Lake City at Rice-Eccles Stadium, Imagine Dragons will continue touring the U.S. and they will be debuting songs from the second half of “Mercury.”

Their double album has brooding and moody meditations on death and human fragility which means their frontman Dan Reynolds has to go to a lot of dark places.

He says, ” I don’t know how to perform without going to the place that I was when I wrote the song.” He continued with there’s so much emotional baggage with Imagine Dragons

The album was named “Mercury” after the reflectiveness and chromatic beauty of the element.

The band just celebrated being the first band in history to have four certified diamond singles, each reaching 10 million or more in sales and stream equivalents in the United States. SiriusXM has announced that Red Hot Chili Peppers will perform at the historic Apollo Theater. The invitation-only concert is part of SiriusXM’s Small Stage Series.

The concert will be on Tuesday, September 13th, and it marks the first time the band has performed at the iconic theater.

The one-night special will celebrate the launch of Red Hot Chili Peppers’s exclusive SiriusXM music channel and will feature the band performing their hits, fan favorites, and music from their current album Unlimited Love

They launched their own exclusive SiriusXM music channel in April.

Rage Against the Machine Cancels European Shows “Per Medical Guidance”

Rage Against the Machine has announced that its planned European shows have been canceled.

According to the band, the cancellations are due to a leg injury frontman Zack de la Rocha endured at a Chicago performance.

The band shared in a statement, “Per medical guidance, Zack de la Rocha has been advised that the August and September 2022 U.K. and European leg of the Rage Against the machine tour cannot proceed. It is with great disappointment that we announce this cancellation.”

The statement continued, “Rage Against the Machine will be finishing their run at Madison Square Garden on August 11, 12 & 14 and then Zack must return home for rest and rehabilitation. The flights, travel time, and rigorous schedule in the U.K. and Europe are simply too much of a risk for a complete recovery.”
Evanescence’s Amy Lee Thinks New Fans Should Listen to Latest Stuff First When it comes to where to listen first, Lee suggests that those new to the band listen to their latest.

“I know it seems weird to pick something off our new album (last year’s The Bitter Truth), but I think I would,” she said to Revolver. “I think it’d probably be maybe the first track off the new album, ‘Broken Pieces Shine.’ I feel like that encapsulates something thematically and lyrically that is very us.”

Lee added, ” Like, this is gonna be us coming back with our first music that’s the rock stuff, first all-original album since 2011—we need to come back with who we are.” 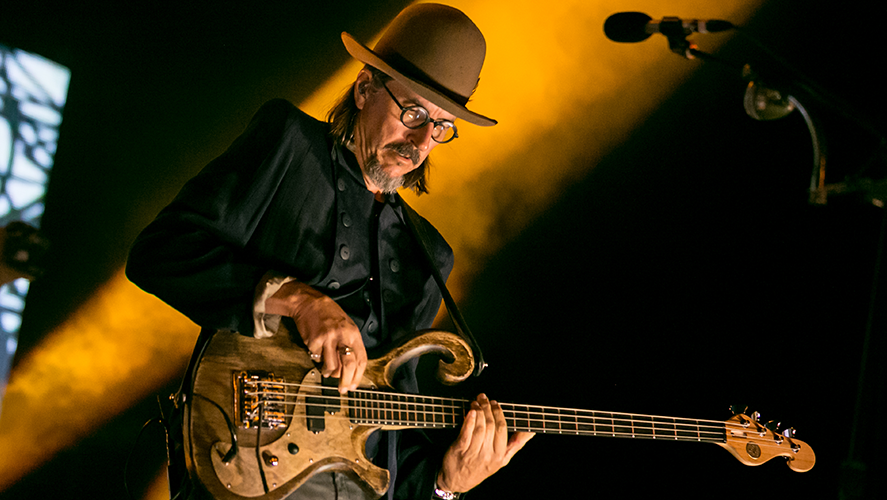 It’s hard not to think of Primus when you think of “South Park.”

The band celebrated the animated comedy’s 25th anniversary with a special live performance in Denver.

Primus was joined by the band Ween, as well as “South Park” creators Matt Stone and Trey Parker for the sold-out, two-night event.

Luckily, there are plenty of videos from the performances online now! The group announced on August 10 – aka Duran Duran Appreciation Day – that a concert movie is coming to a movie theater near you.

Lead singer Simon Le Bon confirmed the ‘A Hollywood High, Duran Duran Live in Concert’ release and said in a statement via the group’s website, “It has been an incredible year (August-August) for the band.

Throughout the year, Duran Duran released their 15th studio album, “Future Past,” last October, were inducted into the Rock ‘N Roll Hall of Fame, performed at the Jubilee for Queen Elizabeth, performances in London and Birmingham, as well as the video for “Tonight United.”

“A Hollywood High, Duran Duran Live in Concert” will be released in cinemas in November 2022.” Michelle Branch has been arrested for allegedly hitting her husband, Black Keys drummer Patrick Carney, in the face after claiming he cheated on her.

According to the police report, police were dispatched around 2 AM for a “possible domestic disturbance”.

Michelle admitted to slapping her husband in the face “one to two times,” though he did not have any visible injuries.

Michelle was taken into custody but released early because she is breastfeeding the pair’s 6-month-old.

If her husband did cheat on her, do you think a slap in the face is justified? How would you react if you found out your spouse was having an affair?