BONER CANDIDATE #1:WELL YOU KNOW HOW THOSE PEOPLE LIVE.

The country’s top health official downplayed concerns over the public health conditions inside meatpacking plants, suggesting on a call with lawmakers that workers were more likely to catch coronavirus based on their social interactions and group living situations, three participants said. HHS Secretary Alex Azar told a bipartisan group that he believed infected employees were bringing the virus into processing plants where a rash of cases have killed at least 20 workers and forced nearly two-dozen plants to close, according to three people on the April 28 call. Those infections, he said, were linked more to the “home and social” aspects of workers’ lives rather than the conditions inside the facilities, alarming some on the call who interpreted his remarks as faulting workers for the outbreaks, the people said. “He was essentially turning it around, blaming the victim and implying that their lifestyle was the problem,” said Rep. Ann Kuster (D-N.H.), who told POLITICO that Azar’s comments left her deeply concerned about the administration’s priorities in fighting the pandemic.

Members of the public have reported ‘suspicious’ men hanging around Irvine Beach Park, North Ayrshire, apparently looking for people to meet up with despite the lockdown. Litter including discarded jeans, tissues, condom wrappers and lubricant had been scattered in the area. Police were called to the beach earlier this year when a woman walking her dog saw a man performing a sex act on himself, but no arrests were made. Speaking on condition of anonymity, a worried resident said: “You see a lot of it going on down there, guys just hanging around suspicious. “They were flouting the lockdown rules and still having sexual encounters in the woods on Marine Drive. “The dirt mount was erected last week and has put a stop to the men parking up there.” The local authority has taken steps to block off the area at the end of April in a bid to stop people parking up. A North Ayrshire Council spokesman said: “We carried out the works to restrict off road motoring at the Beach Park.

Pregnancy can be hard. Ideally, when a couple decides to have children, they should both be on-board with the responsibilities and changes now facing them. One woman found herself flabbergasted when, while pregnant, she asked her husband if he would help more around the house. His response was no. His reasoning? Because he believes they’re both basically pregnant. The husband wrote into the “Am I the A**hole?” (AITA) subReddit, hoping for “honest feedback.” He emphasized first that he wanted feedback and didn’t want to draw his wife’s attention.

BONER CANDIDATE #1:I HAVE A PHD. I’M A PROF AT SAC STATE.

A shocking video of a Sacramento State professor berating his neighbors alongside his inebriated wife, who uses a series of racial slurs, has provoked outrage. Originally posted on May 1, associate economics Ppofessor Tim Ford and his wife, Crystal, are seen ensnared in a heated verbal exchange with their downstairs neighbor, Mikaela Cobb, and her boyfriend. According to Cobb, the argument was prompted after Crystal Ford came down to the couple’s window to complain about the smell of ‘bacon grease’ allegedly emanating from her apartment, but proceedings quickly took a nasty turn. Crystal, who appears to be heavily intoxicated, is heard repeatedly using the N-word towards Cobb and her boyfriend throughout the clip, calling Cobb a ‘b****’ and is seen flipping off the camera. 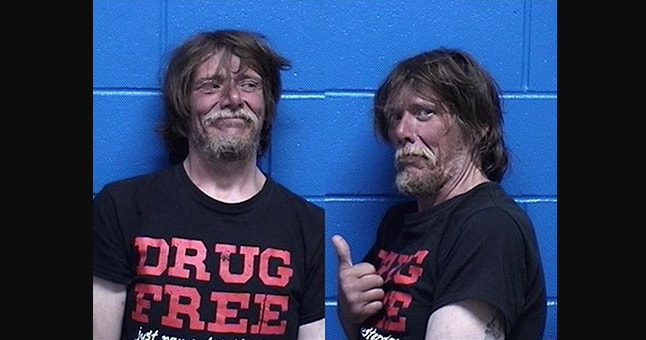 The Montana man, 50, was arrested yesterday afternoon on several charges, including marijuana possession, resisting arrest, and disorderly conduct. He was released this morning from the Missoula County jail after posting bond on the three misdemeanor counts. As seen in the above booking photo, Gallagher, who is something of a frequent flyer at the local lockup, was wearing a “DRUG FREE” t-shirt when collared. The shirt’s full kicker–“Just ran out yesterday”–was cropped out by the jailhouse photographer.

BONER CANDIDATE #3:WE DID OUR TIME

A Castle Rock restaurant reopened its doors to full dine-in service May 10, allowing dozens of customers inside despite public health orders put in place in March because of the COVID-19 pandemic. C&C Coffee and Kitchen, a breakfast and Korean kitchen at 4284 Trail Boss Drive, had a line out the door about 10 a.m. Mother’s Day. Families of all sizes filed in past a “bouncer” with a visible sidearm. Every seat was taken as folks dined in. The floor was packed with people standing, waiting for coffee or take-out orders. One person could be seen wearing a mask inside the building. “I expected it to be busy. I never expected this,” owner April Arellano said. “I’m so happy so many people came out to support the Constitution and stand up for what is right. We did our time. We did our two weeks. We did more than two weeks…and we were failing. We had to do something.” Arellano posted on Facebook stating the Castle Rock Police Department notified the Tri-County Health Department of the violation of Colorado Order 20-24, stating all restaurants must cease dine-in service until at least May 31.