Despite an effort to not reproduce the failures of ‘Apocalypse,’ the studio’s creative team had trouble selling the vision for a finale: “When definite awareness of ‘Rocketman’ is higher than an X-Men movie, you know you’re in strange territory.” For almost two decades, Fox’s X-Men series has been one of the biggest movie franchises in the world. The initial film, X-Men, released in 2000, predated the dominance of the comic book movie genre, and the franchise has been a reliable player at the box office ever since, generating more than $5.7 billion worldwide theatrically. With Disney’s $71.3 billion acquisition of most of 21st Century Fox assets, a deal that officially closed in March,Dark Phoenix marked the end of the X-Men era at Fox. With its dismal $33 million stateside opening, it ends that era with a whimper, not a bang. It wasn’t supposed to be this way. Dark Phoenix was, in many ways, meant to be the ultimate X-Men movie. The tentpole was seen as a course corrective after X-Men: Apocalypse, the 2017 critical and fan failure that grossed $200 million less than the much-praised Days of Future Past two years earlier. But a series of missteps by the studio — some prompted by outside forces — came together to cause the failure.
Read More

San Diego Comic-Con 2019 is quickly approaching – but this year fans will have to do without one of the biggest attractions at the convention. That’s because Warner Bros. will be skipping its big panel in Hall H – including those highly-anticipated DC Films movies that are coming to theaters. It’s been confirmed that WB is indeed skipping SDCC this year, though no real reason or logic for the decision has yet been revealed. It seems like an odd year to take off, considering that the DC Films division alone has some big projects coming later this year / early next year. First of all, the studio has just cast a new Batman in Robert Pattinson, with the first details of Matt Reeves’ upcoming The Batman solo film (first in a planned trilogy) starting to drop. In addition to that, there’s the Joker origin film from Todd Philips and Joaquin Phoenix arriving in the fall; the Batman spinoff Birds of Prey in the first quarter of 2020; and the highly-anticipated Wonder Woman 1984 sequel in early June 2020, before the next SDCC kicks off. Beyond DC movies, Warner Bros. has some other big genre films that one would think were well-suited for Comic-Con, such as the Godzilla vs. Kong crossover film, and the latest remake of Dune from Blade Runner 2049 director, Denis Villeneuve. Finally, there would be opportunity to also give fans first looks at some projects that are further down the pipeline, like Taika Waititi’s Akira adaptation, and the next installment of the Fantastic Beasts franchise. 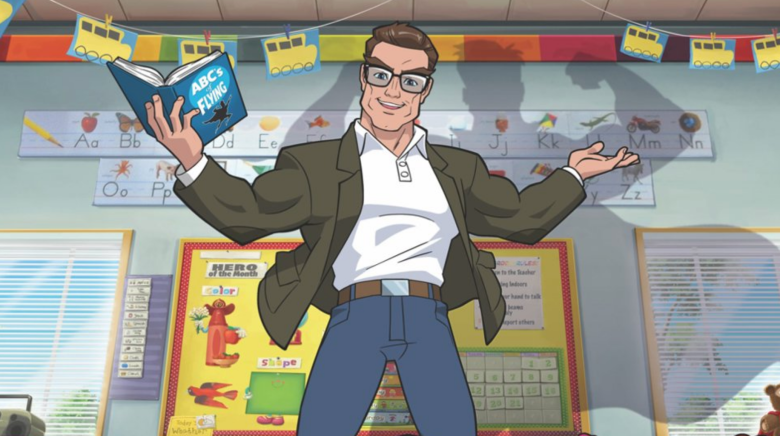 Genius Brands International has announced it is launching the animated children’s series “Stan Lee’s Superhero Kindergarten,” which marks the final project Lee developed before his death in November 2018 (via Business Insider). The series stars Arnold Schwarzenegger as former superhero Captain Courage, who has traded in his life of fighting crime for being a kindergarten teacher that helps train young superheroes. Schwarzenegger told Business Insider he had been meeting with Lee for years trying to figure out a project the two could work on together. “Superhero Kindergarten” was born out of Lee’s love for Schwarzenegger’s 1990 comedy “Kindergarten Cop” and Schwarzenegger’s own desire to make a sequel to the movie. “It is an honor and privilege to help carry on Stan’s creative legacy by introducing this new group of superheros to preschool children around the world,” Schwarzenegger said. “Not only does Stan Lee’s ‘Superhero Kindergarten’ feature comedy and action, but there are many valuable lessons to be learned along the way. Of particular pride to me is the fact that I am not only teaching kids to use their superpowers, but I am also imparting valuable lessons to kids worldwide about the importance of health, exercise, and nutrition.”