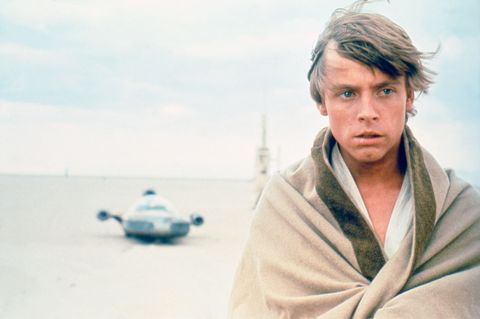 Following the launch of Disney+ in the US, Star Wars fans are now able to stream the original trilogy in glorious 4k – and each film also comes with some rare deleted scenes. Of course, while some of these scenes have been knocking about on the internet for years, the Disney+ versions are much higher quality and also explain why they were left out of their respective films. Some of the deleted scenes in A New Hope give us a better look at Luke Skywalker’s life on Tatooine at the beginning of the film. Yes, we finally get to see Tosche Station, the place Luke desperately wanted to go to get those much-needed power converters. There’s also an early cut of the Cantina scene, in which Han Solo can be seen talking to a woman before Luke and Obi-Wan Kenobi first encounter him. And, as it hadn’t yet been dubbed with alien voices, you can also hear the actors talking in English. As it’s an original cut of the scene, it also clearly shows that Han shot Greedo first – although a change to the full film version on Disney+ has once again restarted that whole debate.

New deleted scenes from Avengers: Endgame have been released on Disney+ and here’s what each of them contains. In the lead up to the highly anticipated launch of Disney’s streaming service, the amount of new content from the Marvel Cinematic Universe was surprisingly low. They won’t have an exclusive live-action show on the platform until next year, but Marvel Studios has found other ways to keep MCU fans interested in the early days of Disney+. They surprisingly announced that a special “Expanding the Universe” video would be available immediately that would offer MCU fans with an inside look at the upcoming Disney+ slate of shows. Disney also confirmed that 16 MCU titles were going to be accessible on day one after only a handful of films were scheduled to be available at first. The new additions included Avengers: Endgame, which was previously slated to arrive in December, and those who wanted to watch the movie (again) through Disney+ were treated to some surprises.

We’ve got everything you need to know about the upcoming Marvel movie schedule all in one place! The Marvel superhero movie plan now stretches all the way to 2023 (and beyond). The amazing thing is, it’s even more ambitious than we anticipated, with new movies getting announced all the time. It looks like even something on the massive scale of Avengers: Endgame was only the beginning. How can anything ever be bigger than that crazy Avengers: Endgame finale? Well, it looks like we’re going to find out soon enough. We’ve compiled as much information as we can find on every Marvel movie coming out in the next few years in a handy release calendar for you. This is where you can check out all the details on Marvel Phase 4 and beyond. You probably want to know a little more about the future of the MCU and all the other Marvel movies in development. Well, we’ve got you covered!