A Utah Airbnb host worries the home she offered to help out a COVID-19 first responder is being used as a party house. The home near 4500 South and 700 East was donated for a health care worker or law enforcement officer to quarantine safely for two weeks at no cost. Instead, video from a doorbell camera shows several people at the home, including what appears to be parties that go on until 5 a.m. During the day, at least two children are seen while the guest and another woman talk about going shopping. It is not what Melissa expected when she offered up her grandmother’s old home to Airbnb’s Frontline Stays program last month.“Well, we do have an empty house and we felt we might as well do something good with it,” Melissa said, who did not want to give her last name. The four-bedroom home typically rents for $140 a night. Airbnb connected Melissa with the guest who began her free 14-day stay on Friday. Melissa believed the woman to be a nurse.

A man has been spotted wearing a racist Ku Klux Klan (KKK) hood to a grocery store in San Diego County, Calif., where face masks are mandatory in public under local coronavirus rules. Several photos and videos circulating online show the man shopping while wearing the tall, pointy white KKK hood at a Vons grocery store in Santee, Calif., on Saturday. He also wore a camouflage T-shirt and dark shorts, and had a long, scraggly grey ponytail hanging down his back. “I was in disbelief,” witness Melissa S. told the Times of San Diego. “He was standing behind me in line, standing quietly,” said Melissa, who asked not to have her last name released. She was among several people who took photos and shared them online. Melissa said another man in a wheelchair “saluted” the man in the hood at one point. “I took the photo because I couldn’t believe what I was witnessing,” she said.

BONER CANDIDATE #3: ONCE THAT MONEY COMES TO MISSISSIPPI WE CAN DO WHAT WE WANT.

NFL Hall of Fame quarterback Brett Favre’s name has surfaced in an alleged multimillion-dollar welfare fraud scheme in his home state of Mississippi.  An audit of funds intended to assist at-need Mississippi residents alleges that the state’s Department of Human Services oversaw more than $94 million in improperly spent federal money. According to the state audit released on Monday, $1.1 million of those funds went to Favre for appearances he did not make. The Mississippi Clarion Ledger and Associated Press both analyzed the documents and report that the Mississippi Community Education Center (MCEC) was one of multiple nonprofits tasked by the DHS with spending money through the Temporary Assistance for Needy Families (TANF) program provided by the federal government.

BONER CANDIDATE #1: HERE’S WHY YOU CAN’T DEPEND ON THE PUBLIC TO DO THE RIGHT THING.

Five state parks in Utah reached capacity this weekend, most of them in southern Utah. “The Governor has been very supportive of state parks and wants us the give people a place to get out, and we understand that, but they need to come out to the park and enjoy the day and do it responsibly,” said Gunlock State Park Manager Jon Allred. Overcrowding at Gunlock Falls, an overflow area from the reservoir, became an issue on Saturday. Park staff put ‘closed’ signage around the falls and near the entry points, but that didn’t deter visitors from coming. “When you get crowds like that that are coming from every direction it’s a battle,” said Allred. A Las Vegas woman had to rescued and air-lifted to a hospital with injuries sustained from cliff-jumping into the falls on Saturday. “Accidents like the one yesterday at Gunlock are extremely unfortunate. We express concern for the woman’s health and wish her well in her recovery,” said Eugene Swalberg with Utah State Parks. 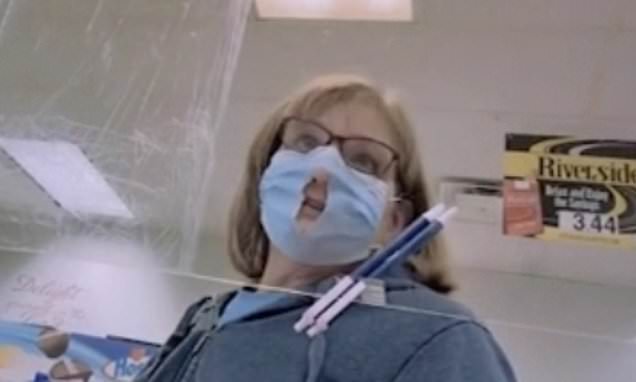 A store clerk was left amazed by a customer who had cut a hole in her Covid-19 face mask because it ‘makes it easier to breathe’. Joe Samaan was working his shift at an S J Food Mart outside Lexington, Kentucky, when a woman came in asking to pay for gas. But unlike the hundreds of other customers Joe sees on a daily basis, the hole in this woman’s protective facewear,  which left her mouth and nose exposed, caught his eye.  Woman cuts hole in face mask as it ‘makes it easier to breathe’ Footage shows the woman approaching the counter and asking: ‘Hi there, can I get 10 on pump one please?’ Joe does the customer’s transaction, before asking: ‘Where did you get that mask from?’ ‘Well since we have to wear them and it makes it hard to breathe, this [cutting it] makes it a lot easier to breathe,’ she replies.

BONER CANDIDATE #3:OKAY, I’LL USE THIS AS A MASK.

Michigan man was caught on video wiping his nose on a worker at a dollar store after she asked him to wear a mask. Detroit obtained surveillance video of the incident, which occurred in a Dollar Tree store in Holly on Saturday at approximately 1:30 p.m. “Here, I’ll use this as a mask,” the man said before wiping his nose on the worker’s uniform. Police said that the man continued being disruptive for a while and then left the store in a van.